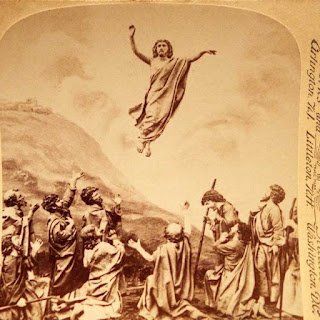 Luke 24:45-51 "Then opened he their understanding, that they might understand the scriptures, And said unto them, Thus it is written, and thus it behooved Christ to suffer, and to rise from the dead the third day: And that repentance and remission of sins should be preached in his name among all nations, beginning at Jerusalem. And ye are witnesses of these things. And, behold, I send the promise of my Father upon you: but tarry ye in the city of Jerusalem, until ye be endued with power from on high. And he led them out as far as to Bethany, and he lifted up his hands, and blessed them. And it came to pass, while he blessed them, he was parted from them, and carried up into heaven."
---------------------
#ascensionday Here we have a 19th century (1898) stereo view card from Underwood & Underwood, publisher in New York, London, Toronto and Ottawa. It has both a right and left eye view on the card (right eye viewed shown here). When placed into a stereoscope viewer, the diorama scene opens up and become 3D to the viewer. It is very impressive to see! Stereo view cards were viewed by Christians around the world long before the arrival of radio, television and the internet. Families would have dinner, then retire to their parlors and view these scenes with oil or gas lamps. This particular scene is called the ascension, and it states: "The last appearance of Christ to human eyes; at Bethany, about two miles from Jerusalem, on the eastern slope of Mount of Olives. The apostles are seen grouped below, in attitudes of ecstasy, bewilderment, or grief." God Bless You!

Cross of the Creation 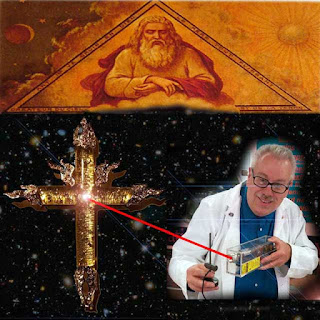 Cross of the Creation: This beautiful cross contains slivers of the famous Allende meteorite from outer space. Allende is considered to be made of the oldest-known material in the universe. It even contains material that is found nowhere on Earth. The Allende meteorite dates back to the time of God's Creation itself ... and its internal structure -- which is contained within the cross -- has remained frozen in time and untouched in space ever since.

This cross is part of the Wonders of the Bible collection, and will be shown during upcoming presentations. I made a laser hologram of it in my holography studio/lab ... as my final project before my retirement. 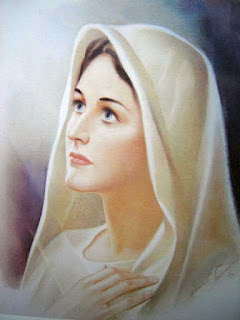 Luke 1:26-33: "And in the sixth month the angel Gabriel was sent from God unto a city of Galilee, named Nazareth, To a virgin espoused to a man whose name was Joseph, of the house of David; and the virgin's name was Mary. And the angel came in unto her, and said, Hail, thou that art highly favoured, the Lord is with thee: blessed art thou among women. And when she saw him, she was troubled at his saying, and cast in her mind what manner of salutation this should be. And the angel said unto her, Fear not, Mary: for thou hast found favour with God. And, behold, thou shalt conceive in thy womb, and bring forth a son, and shalt call his name Jesus. He shall be great, and shall be called the Son of the Highest: and the Lord God shall give unto him the throne of his father David: And he shall reign over the house of Jacob for ever; and of his kingdom there shall be no end."

------------------------
I thought of this beautiful, artistic rendition of Mary as Mother's Day approaches this weekend. Christian artist Warner Sallman (1892-1968) is most famous for his painting titled "Head of Christ", which has sold over 500 million copies. One of his lesser-known paintings is that of "Young Mary", shown here in this lithograph from the Wonders of the Bible art collection. Prayers and God's Blessings to You! 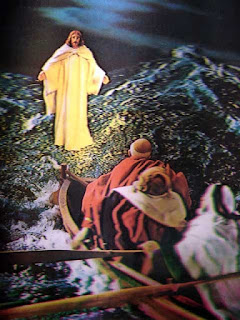 Matthew 14:22-37: "And straightway Jesus constrained his disciples to get into a ship, and to go before him unto the other side, while he sent the multitudes away. And when he had sent the multitudes away, he went up into a mountain apart to pray: and when the evening was come, he was there alone. But the ship was now in the midst of the sea, tossed with waves: for the wind was contrary. And in the fourth watch of the night Jesus went unto them, walking on the sea. And when the disciples saw him walking on the sea, they were troubled, saying, It is a spirit; and they cried out for fear. But straightway Jesus spake unto them, saying, Be of good cheer; it is I; be not afraid." 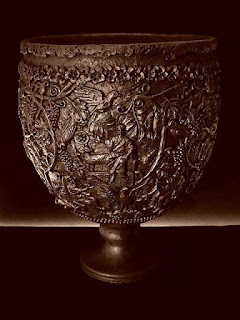 1 Corinthians 11:23-26: "For I have received of the Lord that which also I delivered unto you, That the Lord Jesus the same night in which he was betrayed took bread: And when he had given thanks, he brake it, and said, Take, eat: this is my body, which is broken for you: this do in remembrance of me. After the same manner also he took the cup, when he had supped, saying, This cup is the new testament in my blood: this do ye, as oft as ye drink it, in remembrance of me. For as often as ye eat this bread, and drink this cup, ye do shew the Lord's death till he come." Read more...
------------------
Great Chalice of Antioch Hologram, 2015. Silver halide emulsion on 8 x 10 inch glass plate. Laser / optical system: Frank DeFreitas. Laser exposure / darkroom processing: Deb DeFreitas. Photo is of 3D rendered Chalice in holographic recording set-up.

The church at Antioch dates from 41 A.D. It was there that the followers of Jesus first became known as Christians, and for many years missionaries were sent to preach the gospel. With the fall of Jerusalem, Antioch became the main center of Christianity in the east. The inner bowl of the chalice may have been brought from Jerusalem, where it may have been the very vessel used in apostolic times by the infant church. The vessel is an open-work container of silver, bearing what is believed to be the earliest known portraits of Christ and his Disciples. It is 7.56 inches high, standing on a pedestal and holding a cup which would contain about two quarts of liquid. This cup, too, is of silver, and is a Jewish Passover bowl of great antiquity, identical with those used when Christ was alive. Several timelines suggest that in 30-47 A.D. Peter conceals the Passion relics in Jerusalem; 47 A.D. Peter brings the Passion relics to Antioch; 47-357 A.D. The Church of Antioch conceals the Passion relics; 1910 Archaeological discovery of the Great Chalice at the ruins of Antioch's ancient cathedral. Attempts to discredit began immediately upon its excavation at Antioch. Today it housed in the Metropolitan Museum of Art in New York City, USA, and is considered to be a "standing lamp" from the 6th century, despite previous authentication by world-renowned experts that place it in the time of Christ. The debate continues, but regardless of it, the Great Chalice of Antioch remains a treasured example of early Christianity and Byzantine artisan silver work that was once considered the true "Holy Grail" (exhibited as such at the 1933 Chicago World's Fair: A Century of Progress, and at the Franklin Institute in Philadelphia in 1936).

I will be displaying a full-size hologram at all of my Wonders of the Bible presentations in 2017.