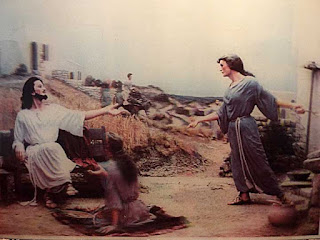 Luke 10:38-42 " Now it came to pass, as they went, that he entered into a certain village: and a certain woman named Martha received him into her house. And she had a sister called Mary, which also sat at Jesus' feet, and heard his word. But Martha was cumbered about much serving, and came to him, and said, Lord, dost thou not care that my sister hath left me to serve alone? bid her therefore that she help me. And Jesus answered and said unto her, Martha, Martha, thou art careful and troubled about many things: But one thing is needful: and Mary hath chosen that good part, which shall not be taken away from her."
-----------------------------
The image above was shot by a famous lenticular artist / technician, Victor Anderson. He made a series of lenticulars of Christian dioramas created by artist / sculptor Paul Cunningham. They were located at the Prince of Peace Museum in Gettysburg, Pennsylvania, and the Prince of Peace Memorial in Silver Springs, FL (both long closed now). While there are scores of postcards commemorating both of these establishments, each has only a standard 2-dimensional photograph of the dioramas. With the lenticulars, the 3D dioramas live on, being as close to the "real thing" as one can get. 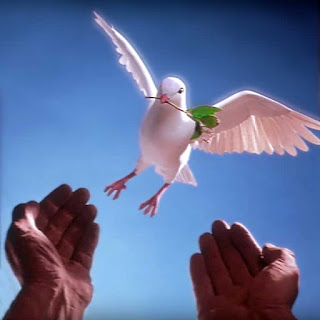 Genesis 8:11-12 "And the dove came in to him in the evening; and, lo, in her mouth was an olive leaf pluckt off: so Noah knew that the waters were abated from off the earth. And he stayed yet other seven days; and sent forth the dove; which returned not again unto him any more."
----------------------
LEARN: View-Master was one of the most famous 3-D viewers in the world. Here we have a scene from one of its film reels -- Noahs' Ark -- showing the dove returning to Noah, as mentioned in the Holy Bible. During its history from 1939 onward, View-Master released many Christian-based 3D story packets. I was fortunate to be able to purchase many of the factory contracts, production files, scripts, master studio photography, and original art work for my "Wonders of the Bible" collection. How did I do it? It was easy … because no one else wanted it! I was the only person who bid on the auctions. Thank you Jesus! God Bless You, Today and Everyday. Love to all my Wonders of the Bible friends. 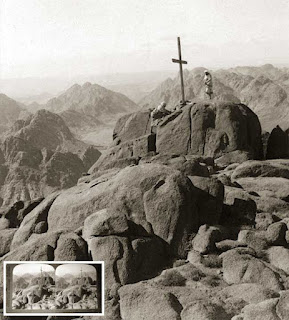 Exodus 31:18 "And he gave unto Moses, when he had made an end of communing with him upon mount Sinai, two tables of testimony, tables of stone, written with the finger of God."
-----------------
LEARN: Here we have an antique stereo view card containing a beautiful photograph showing where Moses received the Ten Commandments on "tablets of stone, written with the finger of God." Note the beautiful cross! The card actually contains *two* photos: a photo for the left eye, and a photo for the right eye (inset photo). When this card is inserted into a stereoscope, the entire scene becomes 3D. Looking through the stereoscope is like being there: everything has dimension and the mountains are actually off in the distance! These were very popular back in the 19th century (1800s). It was published by Underwood & Underwood company, and is part of the vast collection of Biblical and Christian-based stereo views of Wonders of the Bible: "Science, Technology and the Word of God".

Jesus in the Garden 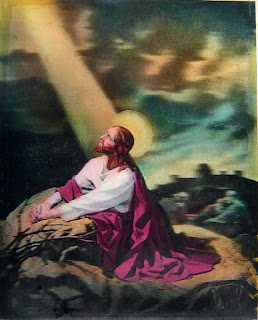 Here we have an antique 3D lenticular of Jesus at Gethsemane, made in the 1950's by Vari-Vue of Mount Vernon, New York. Lenticulars combine two or more images via an overlay that sends one (or more) images to the right eye, and one (or more) images to the left eye. When viewed, these images form a 3D image for the viewer, and many show great depth (3D effect not shown here). Religious based lenticulars were very popular in the 1950's and 1960's. They could be found in many stores and in many homes. Today, lenticulars are making a return, with computer technology and home printing. Wonders of the Bible has a very large collection of Christian lenticulars -- from the earliest days, to the 21st century. Thanks for looking. God Bless You: Today and Everyday!