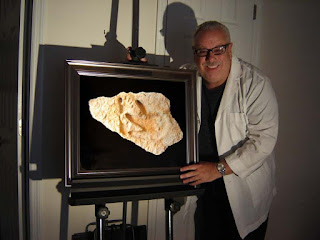 Genesis 1:24 "And God said, Let the earth bring forth the living creature after his kind, cattle, and creeping thing, and beast of the earth after his kind: and it was so."
----------------------
LEARN: Did dinosaurs, men, and women walk the earth together? Here I am with my latest completed project: a 3D-HD lenticular of a very famous -- and also very controversial -- fossil. This fossil contains a dinosaur footprint and also a human footprint at the same time. With future copies, it will allow many, many more investigators to visually examine the fossil in its true dimensional fidelity (rather than a flat 2D photograph). I also created digital 4k stereoscopic files that can be shown on large-format 3D monitors. For more information, google the term "The Delk Footprints in Stone". Some investigators conclude it is real and proves the Biblical Genesis account of Creation. Others conclude that it is a fake. One thing is certain however: it is difficult to get the full impact of the fossil by just looking at flat 3D photos on the web. The objective of this project was to eliminate that shortcoming. Credit: the master photos of the fossil were shot by David Lines at the Creation Evidence Museum in Glen Rose, Texas. It will be officially unveiled in October 2017. More to come in future posts.