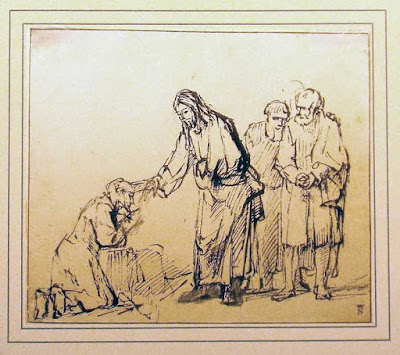 May God Bless you today and every day in the name of our Lord and Saviour Jesus Christ. I now share with you this 19th century collotype of Rembrandt's famous drawing "Jesus Heals a Leper" from my Wonders of the Bible collection; c. 1655-60; Amsterdam, Rijksprentenkabinet. LUKE 5:12-13 -- "And it came to pass, when he was in a certain city, behold a man full of leprosy: who seeing Jesus fell on his face, and besought him, saying, Lord, if thou wilt, thou canst make me clean. And he put forth his hand, and touched him, saying, I will: be thou clean. And immediately the leprosy departed from him."

Crown of Thorns / Shroud of Turin 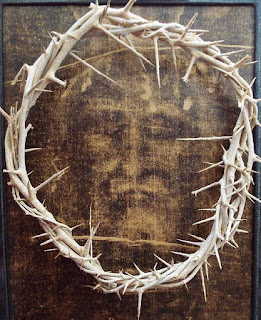 May God Bless You Today, and Every Day: Crown of Thorns replica placed upon a second-generation photograph of the Shroud of Turin. Part of the Wonders of the Bible collection. The photo is so clear that if you enlarge it, you can see the herringbone weave pattern of the linen shroud itself. The reverse contains this prayer, approved by the Archbishop of Turin during the 1933 exposition year: "O Lord Jesus, Who, didst leave to us upon the Holy Shroud the Image of Thy Holy Face … together with the imprint of Thy Sacred Body … tortured and put to death for our salvation: grant, through the merits of Thy Sufferings, that, venerating on earth, the Image of Thy Holy Face upon which the very angels long to gaze, we may be made worthy to contemplate It forever in Heaven. Amen."
at June 19, 2018 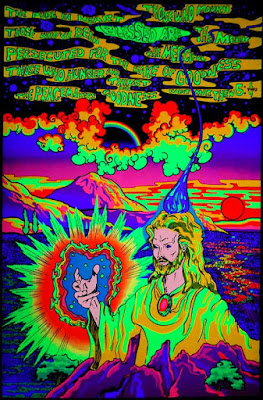 An original 1971 "Sermon on the Mount" poster by artist Roberta Ehrlich, published by Third Eye, Inc. of New York City, NY, USA. It contains scripture from St. Matthew 5:1-9. It is part of my 1960s-1970s pop-culture category of Wonders of the Bible. It is a fluorescent "black-light" poster, which glows very brightly when illuminated. God Bless You Today -- and EVERY Day! Remember to love others just as Jesus loves YOU!
at June 14, 2018 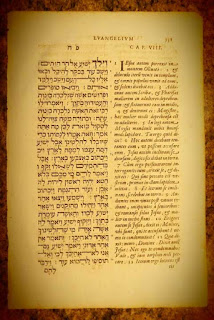 Here is an interesting Latin and Hebrew *New Testament* Bible page from the 1600's that I have in my collection. It reads from the Gospel of St. John, chapter 8, verses 1 to 12: "Jesus went unto the mount of Olives. And early in the morning he came again into the temple, and all the people came unto him; and he sat down, and taught them. And the scribes and Pharisees brought unto him a woman taken in adultery; and when they had set her in the midst, They say unto him, Master, this woman was taken in adultery, in the very act. Now Moses in the law commanded us, that such should be stoned: but what sayest thou? This they said, tempting him, that they might have to accuse him. But Jesus stooped down, and with his finger wrote on the ground, as though he heard them not. So when they continued asking him, he lifted up himself, and said unto them, He that is without sin among you, let him first cast a stone at her. And again he stooped down, and wrote on the ground. And they which heard it, being convicted by their own conscience, went out one by one, beginning at the eldest, even unto the last: and Jesus was left alone, and the woman standing in the midst. When Jesus had lifted up himself, and saw none but the woman, he said unto her, Woman, where are those thine accusers? hath no man condemned thee? She said, No man, Lord. And Jesus said unto her, Neither do I condemn thee: go, and sin no more. Then spake Jesus again unto them, saying, I am the light of the world: he that followeth me shall not walk in darkness, but shall have the light of life." -- May God Bless You Today -- and EVERY DAY! Show kindness to ALL others, and love them … as Jesus loves you. Love, Pop-pop (Frank DeFreitas, Wonders of the Bible).