The 3D Face in the Shroud 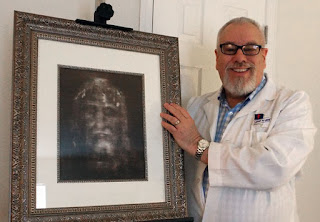 The Face in the Shroud: Here is a life-sized 3-D lenticular rendering of the face in the Shroud of Turin. It was produced by Dutch Holographic Laboratories (this is the lenticular version of their famous "face in the shroud" laser hologram). The data was created by capturing densitometer readings of an original 1931 photograph by Giussepe Enrie. The density readings were then converted from grey scale levels to levels of depth. In other words, each level of density was assigned an associated level of closeness to the viewer, or further away from the viewer. As someone who has worked with image densitometers for several decades, I can verify that these 3-D results are accurate and authentic. Why do I feel that they are accurate and authentic? Because I can reproduce the exact matching results during public demonstrations. This density information does not verify WHO or WHAT the Shroud of Turin is an image of. But it absolutely verifies that there *IS* 3-D information 'encoded' into the Shroud of Turin. GOD BLESS YOU -- Today and Every Day! 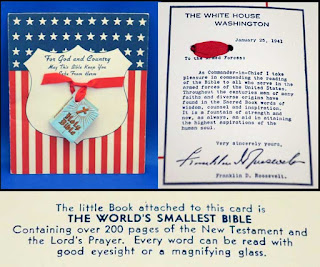 The World's Smallest BIBLE in 1941. It was special to men and women in the armed forces. It included a message from then (1941) President of the United States, Franklin D. Roosevelt: "As Commander-in-Chief I take pleasure in commending the reading of the Bible to all who serve in the armed forces of the United States. Throughout the centuries men of many faiths and diverse origins have found in the Sacred Book words of wisdom, counsel, and inspiration. It is a fountain of strength and now, as always, an aid in attaining the highest aspirations of the human soul. Very sincerely yours, Franklin D. Roosevelt." This is part of the Wonders of the Bible collection. God Bless You … Today and Every Day! AND … Remember to Love Others just as Jesus Loves YOU! 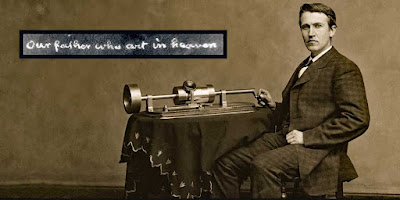 I now have a web page dedicated to the micro script handwriting of Thomas Edison. It gives a bit of history on micro and nano scripture, but focuses primarily on Edison and his Lord's Prayer. You can access the page HERE (web page is McAfee secure).
at September 17, 2018

Thomas Edison and his Lord's Prayer 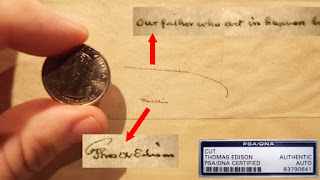 Thomas Edison is well known (also) for his penmanship: practicing scripts, and inventing typographical fonts for the printing press. Shown here greatly enlarged, his micro script of the opening line of the Lord's Prayer must have taken much time and effort. "Our father who art in heaven hallowed be thy name", and then his signature. A recent acquisition (as of Sept. 2018). We have a fine collection of Micro and Nano scripture / art, and this exemplar has to be the jewel in the collection crown. Inspected, authenticated and officially certified (#83790641) through PSA/DNA, it is verified as the ONLY known example of its kind in the world. We display this item illuminated via a 19th century Edison light bulb.

Update: I now have a web page dedicated to the micro script handwriting of Thomas Edison. It gives a bit of history on micro and nano scripture, but focuses primarily on Edison and his Lord's Prayer. You can access the page HERE (web page is McAfee secure).
at September 15, 2018 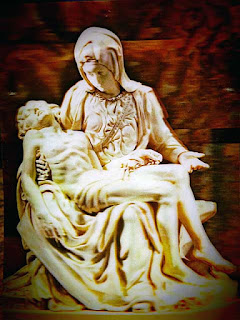 JESUS being held by his mother Mary after his crucifixion. It is a sculpture better known as "La Pietà". It was carved in marble by the world famous artist Michaelangelo in the year 1498. This photo shows a 3-D lenticular post card of the sculpture. It dates to the 1950s-60s, when sending and receiving religious post cards was popular. Follow Wonders of the Bible to enjoy great Christian visual art, science and technology: past, present and future. May GOD BLESS YOU … Today and EVERY DAY!

Raphael's Madonna of the Chair Microphotograph 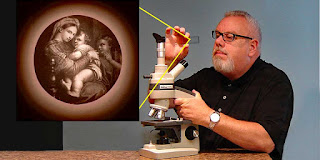 Here I am holding the WORLD'S SMALLEST micro photograph of Raphael's "The Madonna of the Chair". In this famous painting, created in the year 1514, the Virgin Mary is shown holding the infant Jesus, while a young John the Baptist looks on. This image is so small, that it cannot be seen with the human eye. It can only be seen through a microscope (shown enlarged, inset). A beautiful example of how 19th century (1800's) scientists and technicians proclaimed Jesus Christ through their work. God Bless You ... Today and Every Day! AND ... Love each another, just as Jesus loves YOU! 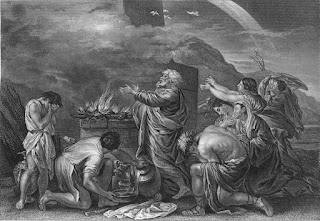 Genesis 8:20 "And Noah builded an altar unto the Lord; and took of every clean beast, and of every clean fowl, and offered burnt offerings on the altar." Here we have a 19th century engraving of a painting entitled "Noah's Sacrifice". The painting was by Nicolas Poussin (1594- 1665), and the engraving (shown) by William Henry Egleton (1833-1862). Engravings are a great and affordable way to collecting famous paintings. I also happen to have this painting as a 19th century microphotograph. It is so small, that it cannot be seen with the unaided human eye. It must be placed under a microscope to see it. It is truly one of the Wonders of the Bible. God Bless You -- Today and Every Day! AND… Remember to love one another, just as Jesus loves YOU... 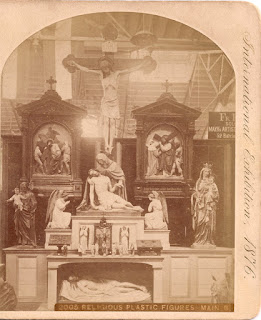 We take plastics for granted in the 21st century. But, at one time, it was a never-before-seen futuristic material. If you look up the history of plastic, many sources state that modern plastic was a 20th century invention. However, its very first appearance to the public was as a mouldable resin at the 1876 Centennial Exposition in Philadelphia, USA, as shown in this right-eye view of a 19th century stereograph. Note how it lists the display as "Plastic Figurines". 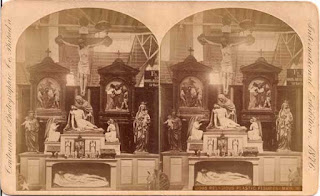 1876 Centennial Exhibition in Philadelphia, USA. The first official World's Fair in the United States. 37 countries were represented, and nearly 10 million people visited from around thw world. This photo is of the full, 3-D stereoview featuring one of the religious displays. It was promoting a new mouldable resin that would become today's plastic.

The Centennial Photographic Company was the exclusive 3D photographers for the Exhibition, issuing more than 4,000 stereo view cards.
at September 07, 2018 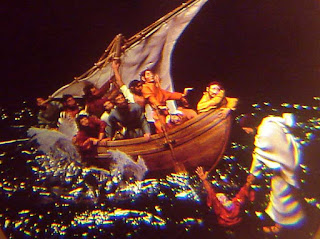 PETER stepped out of the boat and walked on the water toward Jesus. He felt the wind's tug; saw the steep waves. He was afraid. He began to sink! "Lord save me!" he shouted. Jesus stretched out his hand and pulled Peter up. "O you of little faith! Why did you doubt?"

Selection taken from vintage 3D View-Master reel "Jesus Christ: His Youth, Disciples, Miracles", circa 1940's / 50's. May GOD BLESS YOU throughout this week!