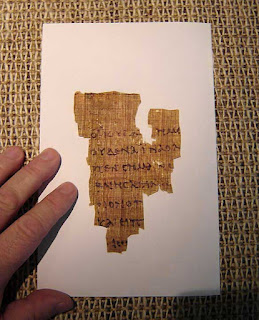 John 18:31-33 " Then said Pilate unto them, Take ye him, and judge him according to your law. The Jews therefore said unto him, It is not lawful for us to put any man to death: That the saying of Jesus might be fulfilled, which he spake, signifying what death he should die. Then Pilate entered into the judgment hall again, and called Jesus, and said unto him, Art thou the King of the Jews?" Read more ...
-------------------------------
LEARN: Here is a museum-quality reproduction of what is known as the "St. John Fragment" or "Papyrus 52" (University of Manchester Rylands Library). Written in Greek, the recto (front) contains parts of John 18:31-33, and the verso (back) contains verses 37-38. This fragment from a papyrus codex was found in Oxyrhynchus (Behnesa), Egypt, by Bernard Pyne Grenfell and Arthur Surridge Hunt. It is the earliest known fragment of the New Testament in any language (2nd century [early] 100-150 AD). Early Christian papyri from Egypt represent the earliest surviving indisputable physical evidence for Christianity and the Christian Gospel. This piece is part of the Wonders of the Bible collection.