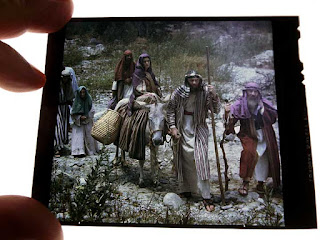 MARY and JOSEPH Travel to Bethlehem: This 1948 Kodak Ektachrome 4x5-inch (101x127mm) transparency is an original master production image from the 3D View-Master reel "The Birth of Jesus". These scenes were produced and directed by the world-famous Cecil B. DeMille (director of the now classic movie "The Ten Commandments"). It is part of my Wonders of the Bible collection. God Bless You … Today and Every Day!
-------------------
Luke 2:1-5 -- "And it came to pass in those days, that there went out a decree from Caesar Augustus that all the world should be taxed. (And this taxing was first made when Cyrenius was governor of Syria.) And all went to be taxed, every one into his own city. And Joseph also went up from Galilee, out of the city of Nazareth, into Judaea, unto the city of David, which is called Bethlehem; (because he was of the house and lineage of David:) To be taxed with Mary his espoused wife, being great with child."