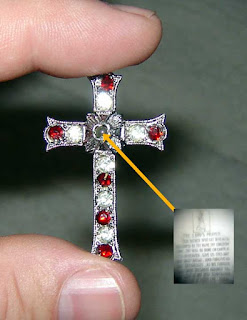 The Lord's Prayer Cross, circa 1859: These were very popular in the 19th century. People would stand in long lines and wait to read them at scientific expositions. They were invented by René Dagron, a french photographer, after he viewed the microphotographs of John Benjamin Dancer. This cross contains a very small microscopic picture of the Lord's Prayer. It is attached to a cylindrical lens which is embedded in the cross and enlarges the image. Biblical scripture microphotography eventually led to microfilm; which then led to micro photo lithography; which led to today's computer chips, smart phones, and space programs. My Wonders of the Bible collection may very well be the largest holding of micro- and nano typographic Biblical scripture in the world today. God Bless You … Today and Every Day! AND … remember to love others, just as Jesus Christ loves YOU!