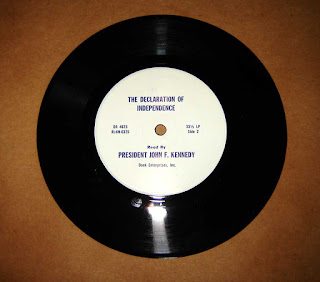 Here is a 45 R.P.M. (rotations per minute) audio record containing the voice of President John F. Kennedy reading the Declaration of Independence. As far as I know, it has never been played. Unfortunately, I gave my record player away when we moved into our retirement apartment in 2017. But, soon, I hope to be able to play and record this for your listening pleasure.

I also have the same type of record with President Ronald Reagan reading the Declaration. This recording was done when he was still Governor of California.

Once I have them recorded, I will come back and add the mp3 files to their respective posts.

Wonders of the Bible is preparing to celebrate the 2026 U.S. Semiquincentennial birthday of the founding of the United States of America.