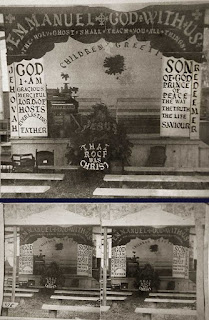 19th Century Christian History: Here's an incredible 3D stereo view card of a traveling Holy Ghost Revival Tent. I have been converting these 3D photographic recordings to Ultra-HD 4k digital files ... which can then be shown on large-screen, auto-stereoscopic televisions (no 3D glasses needed). Many of these Christian-based images are one-of-a-kind, taken by independent stereo photographers, back when photography was still in its infancy. Traveling revival tents were very popular back in the late 19th and early 20th centuries. They would set up on the outskirts of towns across the country, and win heathen souls for our Lord and Saviour Jesus Christ. I take these antique stereo views with me whenever I speak to groups. I include HD digital imaging technologies as well.