Microphotograph: Jesus and the Children 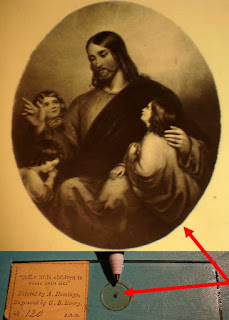 Luke 9:47-48: And Jesus, perceiving the thought of their heart, took a child, and set him by him, and said unto them, whosoever shall receive this child in my name receiveth me: and whosoever shall receive me receiveth him that sent me: for he that is least among you all, the same shall be great.
-------------------
My latest post shows what is known as a "microphotograph". They were very popular in the 19th century. In order to see what was recorded, one had to place the slide under a microscope. It was not visible to the unaided eye at all. The image was the size of a speck of dust! This particular piece, part of my Wonders of the Bible collection, shows Jesus with children in a painting titled "Suffer little children come unto me." The painting is by A. Hemings, and the engraving is by G. B. Every. The microphotograph was created by John Benjamin Dancer (England) -- using a single candle as a light source! It is important to know that these scriptural microphotographs eventually led to the microfilm of the 20th century. Microfilm then led to the micro circuits of modern day computers, cell phones and satellites in space. The scientific and technological / electronic - photonic world that we know today began as micro-scripture in the mid- 19th century. God Bless You!
at April 18, 2017