The World's Smallest Declaration of Independence has to be viewed under a microscope...


Here I am (Frank DeFreitas) holding a microscope slide dating back to the mid- 1800's. This 19th century slide contains the image of the world's smallest Declaration of Independence.

When this extraordinary version of our nation's birth certificiate recently became available, I knew that I had to try my very best to add it to my extensive collection of micro Biblical scripture and art.

This Declaration of Independence is the size of a single snowflake. As far as I can tell, the only microphotographer that produced them was Joseph Israel Solomon of Great Britian, sometime around the year 1860 (microphotography followed closely behind the invention of photography in the 19th century). 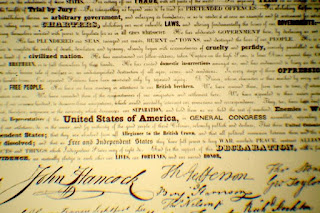 There are many various printed, handwritten, and engraved versions of the Declaration of Independence ... from the very first Dunlap Broadsides (printed overnight on the night of July 4th 1776), to contemporary versions still being produced today.

There are a few individual copies of the Dunlap Broadside that are very famous and highly sought-after, such as the Corn-Driscoll Facsimile. This particular facsimile is so famous, that there are facsimiles made of the facsimile! You'll see one of these at my exhibit.

This microscopic version is the smallest Declaration of Independence in the world for its time period -- and, perhaps, of all time ... since I have yet to locate one that is smaller. How small is it? Well, it requires a laboratory microscope to view it! Since the entire document, reduced and recorded, is the size of a snowflake, imagine how small each letter has to be. It is simply mind-boggling.

Christ, Creation, and the Declaration of Independence

Here at the Wonders of the Bible blog, the month of June 2020 will be dedicated to the Declaration of Independence. I am currently producing both a live presentation, along with an exhibition, as we continue to move closer to the 250th anniversary (semiquincentennial) of the founding of the United States of America.

Lord willing, my presentation and exhibition will be ready for a fall 2020 launch -- and will continue to be offered right up until the 2026 celebrations.

The title of my presentation and exhibit is: Christ, Creation, and the Declaration of Independence.

The live presentations will focus on the following four topical areas, taken directly from the text of the Declaration of Independence itself:

1. Laws of Nature and of Nature’s God
2. Created by their Creator
3. The Supreme Judge of the World
4. Divine Providence

I am convinced that it is only through the God of the Christian Holy Bible that a document such as the Declaration of Independence could have sprung forth in the first place.

My thesis with this new presentation and exhibit is that not only were the founders Christian, and not only did they build the foundation of the United States of America on Christian principles, they were also Creationists ... believing in the Biblical account of Creation, and not evolution.

And through the exhaustive study of personal correspondence and manuscripts through the National Archives, I will do it in their own words.

The Bible in Pennsylvania History:

The exhibitions will showcase the Christian Holy Bible in its developmental history from cunieform tablets to ancient Hebrew scrolls; from the invention of the printing press to the printing of the Textus Receptus;  and from the English translation of William Tyndale to the first Bibles printed on American Soil: from Pennsylvania, New Jersey, Delaware and Maryland.

You won't want to miss several examples of the Declaration of Independence, an engraving of Thomas Jefferson's original draft, and an authentic Corn-Driscoll Dunlap Broadside facsimile. And don't forget to look through the microscope ... so you can say that you saw the "world's smallest".

Check back from time-to-time throughout June 2020, right here at the Wonders of the Bible blog. I will use this month to kick off the coundown. I'll be featuring many of the exhibit items here for you to see. Look for the identification label of BibleAmerica250. 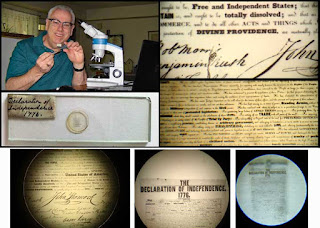