Just got the new WaveLab Cast 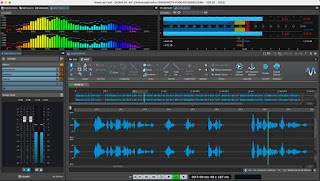 Here's a screen shot of the new WaveLab Cast by Steinberg. I've been waiting for a simple-to-use program that I will use strictly for editing and converting to MP3.

I have the majority of my recording equipment as outboard analog gear.

From what I understand, it was just released as a download today, so I grabbed it as soon as the the email came through. I already have the full Cubase ... but it was far too much overkill for simply editing and converting a single spoken voice podcast.

I thought I'd post a photo of the user interface, since I'm sure people will be curious to take a look. Steinberg also have a "regular" WaveLab program, and this appears to be similar in appearance, if not in features.

I've been a big fan of Audacity for many, many years. And, my very first digital workstation dates back to the 1990's with a program called Macromedia Deck II. Back then, the files were converted to RealAudio format. And the stream consisted of 6 kilobits per second. Remember this was back with 14.4 modems (or a 28.8 if you were lucky ... and rich).

And here is a sample that I just finished. For this sample, and to demonstrate the complete program, I did not use any of my outboard equipment (UA LA-610 MKII, etc). I took the raw digital file, and completed it in the WaveLab Cast. This was actually a lot of fun. And, for podcast hobbyists, I believe this new production app will be very appreciated. The microphone is a Neumann 705, fed through a SOYEZ analog launcher, into a Soundcraft Signature desk. Conversion was done with a Denon Professional DN-300R MKII rack unit at 24/48. This was then transferred into my Mac workstation running the WaveLab Cast software program, and converted to 128k MP3. As follows: