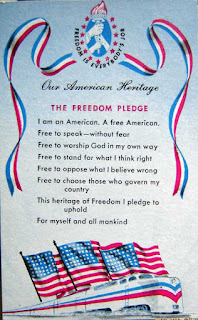 Continuing with our BibleAmerica250 Semiquincentennial Declaration of Independence theme for June 2020, here is the promised second post card in the 1947 Freedom Train series. It is titled The Freedom Pledge, and I will type out that pledge below:

I am an American. A free American.

Free to speak -- without fear

Free to worship God in my own way

Free to stand for what I think is right

Free to oppose what I believe is wrong

Free to choose those who govern my country

This heritage of Freedom I pledge to uphold

For myself and all mankind

Before we close out this June series (by July 4th) for Wonders of the Bible blog, we will also take a look at the 1976 Bicentennial America's Freedom Train (upcoming).

When the 2026 semiquincentennial arrives for the 250th birthday of the founding of the United States of America, the 1976 Freedom Train voyage will be celebrating its golden anniversary, or 50th anniversary.