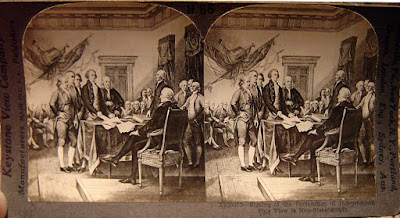 June 2020 is Declaration of Independence month here at the Wonders of the Bible blog. Better to have it leading up to July 4th than following it, right? Okay.

Here we have an early 20th century stereograph depicting the signing of the Declaration of Independence ... it appears to be either a reproduction of, or a variation on, the painting by Trumbull. It is a commonly found stereograph.

I added it to the collecting to go along with the newer Declaration of Independence acquisitions, regardless of its dimensionality.

And, by the way, the Wonders of the Bible archives contains one of the finest Christian-based collections of 19th and 20th century stereographs in the world. The collection is home to many one-of-a-kind stereographic images ... produced by independent stereo photographers. This was a very expensive hobby and/or profession for the era -- similar to the way that holography was in the mid- to late 20th century.

I have always tried to aquire one-of-a-kind Christian collectibles. Why? Well, because if it is one of a kind, and you are the owner, then no one else in the world can ever own another one -- regardless of how big their organization is.
at June 12, 2020