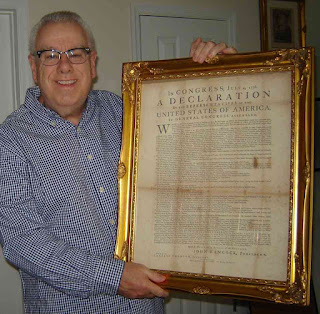 It is known as the "Dunlap Broadside".

And as of the year 2020, a very famous facsimile now resides in Allentown, Pennsylvana .

The first printing of the Declaration of Independence that this facsimile is recreated from is sometimes called the "Lost Copy". It was re-discovered in 1968 on the dusty shelves of Leary's Book Store in Philadelphia, during its closing after 132 years.

This is the version of the Dclaration that was printed on the night of July 4, 1776. It was used to make the announcement of newly-voted Independence from Great Britian to the rest of the American colonies.

26 originals are known to still exist.

Donnelley & Sons then went on to produce a limited number of facsimiles. Exact paper was specially manufactured, and the ink was formulated to match that of the original. Even the stains, folds, and age marks were faithfully reproduced by Donnelley.

They made it known that no expense was spared in thir process.

The facsimile iteself is now world-famous and highly collectible ... truly a rarity in the world of historical documents.

For several years the owners displayed the original Declaration without charge throughout the United States. It now resides in the Dallas, Texas public library.

It was added to the Wonders of the Bible collection for its several references to God.

Featured on the 1976 American Freedom Train during the Bicentennial Celebration: Substituting for an original Dunlap, a Corn-Driscoll facsimile was used on the nationwide tour of the American Freedom Train from April 1975 through December 1976. It was displayed in train car #1, and was seen in 76 cities in the 48 contiguous states.

It is not known what happened to that particular facsimile. Could this be the one?