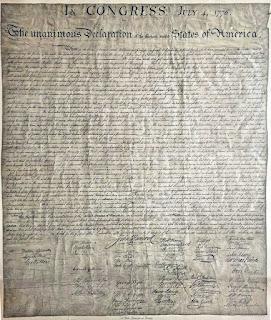 Here is another Declaration of Independence that I've added to the Wonders of the Bible collection: a famous lithograph print by Thodore Ohman made in 1942. Ohman used a black and white photograph (taken in 1903) of the by-then faded Declaration as the background, then placed the William Stone engraving of 1823 over top as an overlay. It provided one of the most accurate depictions of the declaration at the time, and showed how it would really look if it hadn't aged so poorly.

Many companies contracted to have this print produced for them with their company name at the bottom. Coca-Cola was one. The copy that I have was from a bread company, and it also stated "A Public Service for our Country" at the bottom.

While this is the document that is so often associated as being the "Declaration of Independence", it was actually the broadside printed by John Dunlap on the evening of July 4th that is truly the official document. This version, shown above, was not created and signed until August 2, 1776.

I have done something simiar with my own version of the Declaration. In addition to adding the 1823 William Stone engraving to a cleared 1776 faded document background (which I cleared entirely by hand), I also highlighted all four main reference to God in red ink.

If you would like to see my version, you may do so by CLICKING OR TAPPING HERE. 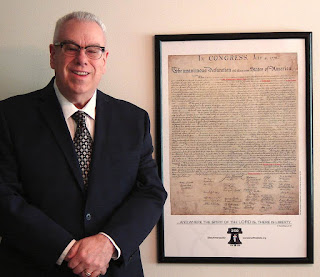