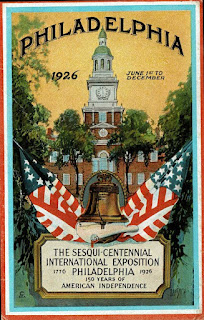 As we prepare for the 250th Semiquincentennial celebration in 2026, let's not forget about the Sesqui-Centennial International Exposition held in Philadelphia, PA in 1926. If you haven't ever heard about this extraordinary event, do look it up ... it was like a World's Fair in Philly.

Now, I know that I no longer have the mental dexterity that I had in my youth ... but let me take a crack at the following:

We will be celebrating the 250th anniversary of the signing of the Declaration of Independence in just a few, short years (2026) -- and, since I'm now in my retirement years, I hope that I'm still around for the celebration.

Wonders of the Bible, however, is ready now ... since the whole point of the collection is to document the history of the Bible (and its influence) and how the Word of God gets to us ...

... from early cuneiform tablets, to Hebrew scrolls, to the printing press, and eventually to lasers and holographic data storage.

And somewhere in there in that long history is Colonial America.

In the meantime, I look forward to giving presentations and exhibiting the collection ... especially to show the Bible's role in early Pennsylvania, New Jersey, Delaware, and Maryland's history. Of course, this will include its influence on the signers of the Declaration of Independence ... not to mention the document itself.

June 2020 is dedicated to the Semiquincentennial 2026 here at the Wonders of the Bible blog ... so stay tuned for more posts.

And, remember, our hashtag is now: #BibleAmerica250 on Twitter.